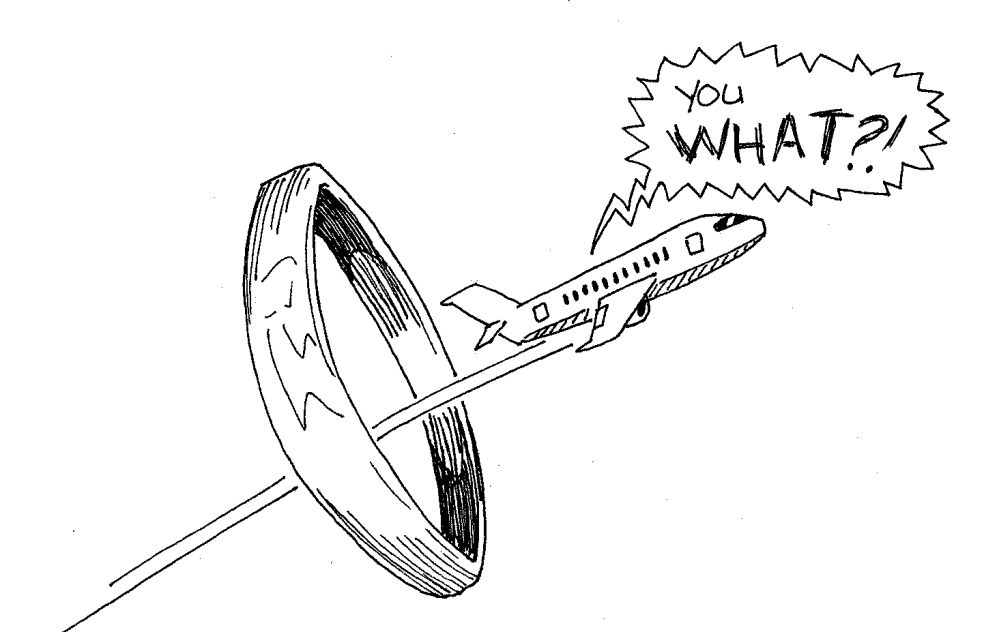 “Oh my God,” Lance whispered.  We had just gotten onto an airplane, so the last thing you want to hear is any sort of concern or panic.

“What’s wrong?” I said, fastening my seatbeat.  Maybe if I acted cool and followed normal procedure, everything would be fine.

“I can’t find my ring,” admitted Lance, patting himself down, reaching into pockets, digging through his backpack.

“I don’t have my ring!” he said.  Dozens of people were streaming past us, hefting their enormous luggage into the tiny overhead compartments.

I was, as usual, sort of confused.  “Were you wearing it? Maybe you left it at home?” I offered.  Lance often doesn’t wear his ring because his knuckles are enormous and trying to get the ring on or off is like attempting to free some kid who got his head caught in the bannister (see Full House, season 3, Episode 14).

“No, no, I definitely had it…” said Lance, trailing off as he retraced his steps in his head.  We were on a flight to New Orleans for a sort-of family reunion, the first time Lance would meet my legendary aunt and paternal grandparents.  Of course he was going to wear his ring.

“Okay, okay,” I said, the obvious filler word anytime you’re trying to calm down somebody whose fretting is building exponentially. “When’s the last time you remember having your ring?”

“I took it off when we went through security…” said Lance.

Um. This puzzled me.  “Why’d you take your ring off to go through security?”

Lance shrugged. “I didn’t want the metal detectors to go off. I put the ring in my shoe to go through the x-ray…”

!!!, I thought.  “But…what? It’s not going to set off the metal detector!!” In that moment, I was struggling to see the logic here, which manifested in my voice going from calm reassurance to accusatorial shrieking in the span of a sentence.

“How do you know that?!” Lance shot back defensively.

Ack! “If they stopped everybody who wore their wedding rings through the metal detector no airplane in the history of aviation would ever depart on time!”

Lance slumped down in his chair. Usually, Lance is much quicker on his toes in an argument than I am, and knows how to escalate and deflect quickly, which means he often wins just by sheer overwhelming force.  This time, though, he was stumped. “Hrmph,” he resigned.

“Well,” I said, trying to backtrack a bit.  It wasn’t like it was that expensive of a ring. “I’m sure you have it somewhere. It’s probably in a pocket or something you haven’t checked yet.”

It wasn’t.  Lance really did lose it at the airport.  The ring, from TeNo Jewelry in Soho, cost somewhere around $400 and was to serve as both an “engagement” and a wedding ring (we were going to engrave something on the inside for the wedding, which we’ve never actually done).  Though, knowing Lance and his at-times diva tendencies, I suspect this was really his sneaky attempt to force me to buy a second ring.

We never did find the ring. I called the Lost & Found at Philadelphia International Airport (“It’s got a reeeeeally tiny diamond in it,” I described) multiple times, to no avail.

A few days after losing the ring, Lance admitted that there might have been another place where it could’ve been misplaced:

“…Wendy’s?” I asked, a little flabbergasted. Who loses their wedding ring at Wendy’s?

“Yeah,” said Lance. We had eaten at the Wendy’s in the airport’s food court before boarding our  plane.  “I think I might’ve put my ring on the tray while I was eating and accidentally thrown it out…”

So, there you go, folks. Lance probably lost his engagement ring while eating a loaded baked potato at Philadelphia International Airport.  Ah, love.

There’s no real way to do justice, in writing or doodling, to what happened five years ago.  Still, it’s something Lance and I refer to often; as our friend Christie says, life at that moment “was divided into two eras: ‘Before the Accident’ and ‘After the Accident.'”

I was in graduate school at the time, killing time between classes when I got the call from one of Lance’s co-workers.  “Lance was in a car accident,” she said between rapid breaths.  “We didn’t have your number…Lance told us your number…”

There wasn’t any more information: just that Lance had been hit by a car and was in the hospital across town.  I hopped in a cab, my heart racing as fast as traffic was slow.  Lance’s boss called me while I was in the cab.  “He’s in Trauma,” he said.  “He’s talking. Christie and Mandy were hit, too.”

Trauma?  What did that mean?  Was it traumatic? What is “traumatic” in hospital-ese? What happened to Christie and Mandy?

I finally got to the hospital.  Lance’s boss, Mark, was there in the ER waiting room.

If you’ve ever been in an inner-city emergency room, you understand that it’s the place where a million nightmares are born. Screaming, crying, apologies, a frenzy.

Lance was on a gurney up against a wall in a hallway, neck wrapped in a brace.  My heart skipped a beat.

“Hi honey,” he said, a weak smile on his face as I approached.  This was the first time I ever cried in front of Lance (the handful of other times are reserved for sad sequences in Pixar films).

“What?” I asked, befuddled.

“My teeth? Did I chip a tooth??” Lance is fiercely protective of his nasty-ass brown teeth.

“Yeah, it’s just a precaution, they said,” Lance responded.  “They cut off my jeans.  I don’t have any pants.”

The EMTs at the scene found Lance unconscious on the sidewalk.  Lance and his co-worker, Mandy, had gone for a coffee run with our friend Christie, who also had to stop at a nearby animal adoption center for work.  While walking along the sidewalk, they stopped at an intersection, where a guy happened to run a red light, hitting another car and pushing it up into the sidewalk, right into Lance, Christie and Mandy.

Lance’s jeans were cut off while trying to stabilize him for the stretcher. The EMTs went for his jacket, too, but Lance somehow regained consciousness and the strength to fight them off. “This jacket is discontinued! It can’t be re-bought!!” I believe is what he said.

Mandy was rushed to a different hospital, where we found out later she suffered a pretty severe concussion after being thrown against a brick wall. Lance broke his leg.  Christie…we didn’t know anything about at first. People were telling us “it wasn’t looking good,” but we had no idea what that was supposed to mean.

We were to find out over the next several hours, days, weeks, months, as Christie underwent an extensive list of surgeries and physical therapy, that she’d suffered serious injuries in the accident.  Eventually, Christie would have to amputate the lower half of one of her legs due to the amount of muscle loss.

Like I said, I don’t have the skill to do justice to what happened, especially since I was only tangentially involved in the experience.  It’s that sort of thing that lingers in the back of your mind but is always there; it never goes away.  At the same time, though, it served as a weird, twisted bonding experience for Lance, Christie, and Mandy.  It’s something they’ll always share, for better or worse.  They’re more connected because of it.  Lance and I had our wedding reception at Christie’s beautiful house, three years after the accident.

Oddly enough, this experience also led to my first meeting with Lance’s family.  At the time, I was the “caring friend” who went back to Lance’s apartment to get a fresh set of clothes for when Lance was discharged.  Though everybody knew who I really was, we all played along given that the situation was bigger than any squabbling about religion and identity politics.

So, in a hamfisted attempt to end this on a positive note, since Lance broke his leg, he was given the week off from work following the accident.  Of course, between the trauma and inability to move around all that much, we just ended up eating a lot of take-out in Lance’s bed (this was before we lived together officially).  Lance would stuff chicken sandwiches and pizza into his face all day long. Lance gained like ten pounds.

Of course, passive aggression and a relationship/marriage/living with a roommate/whatever don’t usually mix too well (as you can read about here and here).  I will usually internalize issues I have, thinking they’re individually not worth putting up a fight over, until I’m so overwhelmed with pet peeves that I end up exploding over something like having peas instead of broccoli as a side for dinner.

It’s the turn of the seasons, though, and with that, comes a renewed outlook on my approach to life.  And since I don’t like directly addressing problems or concerns that I have in a normal, healthy manner, I’ve resorted to singing my issues instead.

Take this one, for example, from this past weekend:

I make it all week looooong

And take you on all your walks

He can at least make it

(So, not only am I singing–and not making much of an effort at rhyming–but I’m singing to the dog instead of my husband.)

This is me breaking out of my non-confrontational shell.  At least I’m verbalizing my issues now! 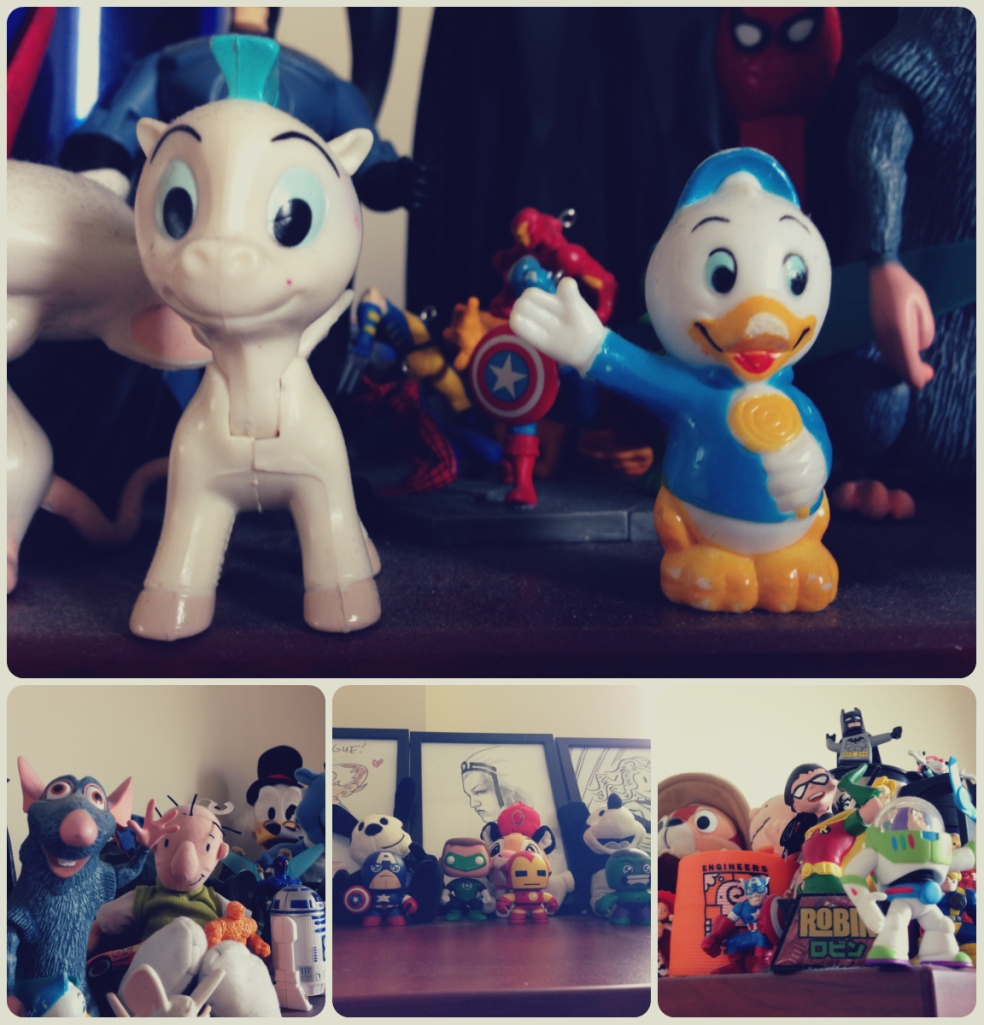 A quick post today since, well, this week is gonna suck.

It’s probably the second-busiest, emotionally-draining time of the year at the university where I work as an academic advisor.  Some students are planning for summer research or work opportunities, while others are struggling with the realities of academic probation or dismissal or just plain old wrong “fit” with their major.

I’m grateful to my boss for letting me bring a little bit of pop color fun into my office (well, I don’t know if she let me so much as never told me I couldn’t…).  In my youth, oh so long ago, I loved collecting figurines of all sorts: action figures, “doll babies,” stuffed animals, etc.  I’m a collector at heart and love to accumulate tons of, well, nonsense.

I’ve curbed that tendency a lot over time; Lance doesn’t want the stuff piling up around the house and I honestly can’t blame him.  Thankfully, I can bring what pieces I have left to my office, where they line the top of my cabinets and sides and back of my desk: my original, 1995 Buzz Lightyear; my Chip n’ Dale Rescue Rangers stuffed animals from the ’80s; the custom Muppets we created at the Muppet Whatnot Workshop at the F.A.O. Schwarz in New York; my commissioned sketches of superheroes from famous comics artists.

They’re a great conversation starter. While I’d venture to guess they don’t buy me a lot of respect amongst my superiors, these little figures often cut the tension/lighten the mood when a student visits my office.

I need them to serve as backup during this roller coaster of a week!